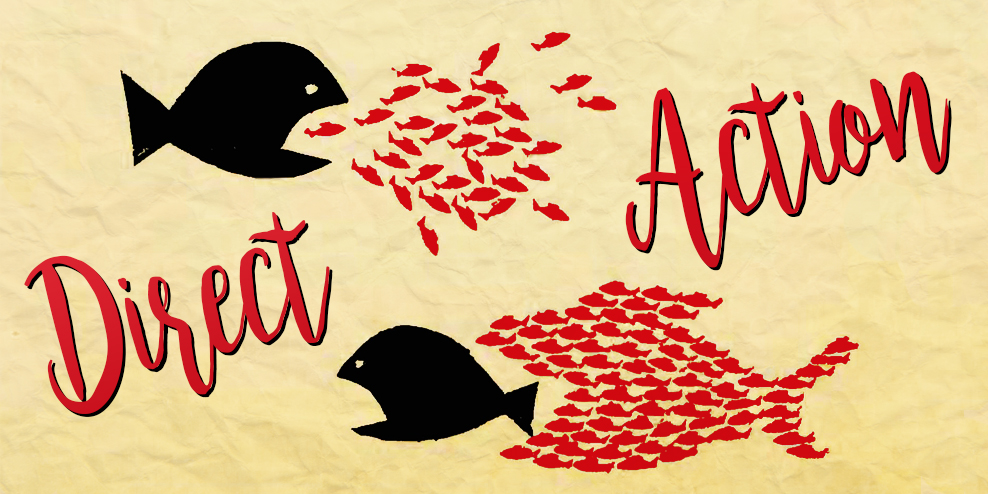 Management Admits: Direct Action Is the Only Way

So admitted Shelby Oswald, a manager of Wild Coffee — the establishment the Retail Action Network had its recently victorious campaign against, where illegal abuse was done to a worker.

The keyword, of course, in this eloquent statement is “only” which, oddly enough, brings a slight agreement between those that defend the act of exploiting workers and those of us workers that have stood against such cruelty. For it’s true that direct action was what really made the management of Wild Coffee ultimately cave into paying the abused worker $453 that was illegally kept from them. Although the campaign ended quietly with the immense help of the Together Against Poverty Society/Employment Standards Legal Advocacy Project, what really pushed Wild Coffee to do the right thing was their understanding that if they didn’t they would face immediate and escalating direct actions at their location by dozens and dozens of workers in the community.

What is direct action, though? Is it “terrorizing” and “mindless” as Oswald cries with theatrical emphasis?

What must be understood first, before answering, is that this tactic is done by the working class against the employing class, the two of which have fundamentally incompatible class interests. Does the worker making minimum wage, just scraping by to pay rent (crammed in a tiny apartment with two, three, six others), share the same interests as the owner that makes profits multiple times more than them? Does the worker even share the same interests as the hired manager that makes a hefty amount more than them in exchange to squeeze as much labour out of the worker as possible with the threat of firing the latter if they don’t exert themselves till physical and mental exhaustion? No, the worker struggles to make ends meet, often sacrificing aspects of their life — friends, family, joy, dreams, education, etc. — just to get by. The employers, on the other hand, live their lives off the backs of the workers they employ and exploit. This class distinction is true for small business and large alike, even if the latter are more recognisably terrible; exploitation of workers by employers is fundamental to capitalism, for that is how profit, and thus capital, is made. Therefore the basis of direct action is class struggle by members of the working class.

The French anarchist Émile Pouget in his work L’action directe described the tactic as the following:

Direct Action is a notion of such clarity, of such self-evident transparency, that merely to speak the words defines and explains them. It means that the working class, in constant rebellion against the existing state of affairs, expects nothing from outside people, powers or forces, but rather creates its own conditions of struggle and looks to itself for its means of action.[2]

It’s a method of self-initiative by which we rely on no one but ourselves and our fellow workers in making change that affects our lives. It refuses to bow meekly and beg for help to the representatives of the bourgeois state which perpetuates the very capitalist system thriving off of the exploitation we endure. Direct action recognises that “the emancipation of the working classes must be conquered by the working classes themselves.”[3]

Why, though, prefer direct action when there are other less “terrorizing” and “mindless” methods such as going through the Employment Standards Branch?

When a worker is abused by their employer they are told by the Employment Standards Branch to use their “self-help kit” to resolve the problems all by themselves; if this is not attempted then “the Employment Standards Branch will not accept complaints.”[4] Thus the inadequate Employment Standards Branch ignores the huge disproportion of the power dynamic between worker and employer, while also ignoring the fact that if the worker was already abused by the employer chances are the latter won’t take too kindly to further pestering about fair or legal treatment. If the worker, alienated further by the Employment Standards Branch, can’t find success through this “self-help kit” then they can make a complaint and a long, tedious, bureaucratic process begins which takes many months to complete. This method is often too long for most workers to get tangled up in, and therefore is the boss’s choice of bluff to promote. Anyone who rejects direct action in favour of the supposed peaceful method has either never endured minimum wage or has forgotten how every dollar counts when putting food on the table and paying rent. To know that when workers are illegally underpaid, unpaid, and unjustly fired there’s left a gaping hole where once there was income, and so to get that owed money back through the Employment Standards they’ll have to wait in such a miserable situation for half a year or longer — to know that and then decry against direct action is to care more about order, procedure, decency, whatever you want to call it, but ultimately the bosses’ money over the livelihood of abused workers.

Direct action instead doesn’t relying on the benevolence of some distant expert on employment laws nor on any disconnected politician, but rather utilizes the worker’s own power along with their fellow workers’ in shaping how they are treated by the employer. In this way the employer is held immediately responsible not from some far off laws which they may confidently think many workers either don’t know about or don’t have the energy to pursue, but rather they’re held responsible by the collective workers (inside their workplace and out). It’s an assertion of autonomy while also an act of democracy and freedom. In fact, democracy in the workplace can blossom through this practice. Through direct action workers can shift the power dynamic in the workplace from being concentrated in a single person with a few supervising underlings dictating how things are done in a most severe manner to one in which the majority can equally decide how to fairly run the workplace for the benefit of everyone. It only takes one act of direct action to show a world of possibilities to the workers — one of cooperation and collective decision making by the workers in the workers’ interests.

Perhaps most importantly, though, for us workers and labour activists, when it comes to why we should use direct action, is the fact that it connects workers across workplaces in the community. This tactic of struggle makes us rely on each other not the disconnected politicians and legal experts that will never experience the distinct issues that we live through here. When put into practice direct action opens our eyes, raised our class consciousness; it gives collective confidence in ourselves to know that united we have the power to change our lives for the better. Thus the tactic of direct action has the radical potential for creating or further strengthening a mass movement of workers for justice. If a worker addresses their abuse through the slow legal path of the Employment Standards Branch bureaucracy they usually go through alone. Whereas by taking the struggle against their abuse publicly into the streets with their fellow workers they unleash a brave call to all workers in the community for solidarity as well as a call to all those other workers to address the abuse they themselves endure at their own workplaces. Through this act connections are make across the city from workplace to workplace, industry to industry, and beyond. These connections strengthen class consciousness, the practice of mutual aid, and the potential for further direct actions for workers’ justice. This is especially needed in our current economic landscape dominated by small isolated service-based workplaces which have a more difficult time unionising. Direct action is therefore a key which can open a door to broader mass movement by all working and oppressed people.

Where We Are Now

We have seen a manager publicly admit that direct action was the only reason an abused worker was paid what was illegally withheld from them. They might as well have said that they would have happily gotten away with illegal abuse of a worker if it weren’t for fellow workers in the community uniting and organising direct actions of solidarity. It’s a wonder if they would also publicly admit that they don’t care about democracy, justice, or the livelihood of workers in precarious employment.

Workers have historically used the tactic of direct action across the world for a number of reasons, but put simply it’s because it succeeds in its aim (more efficiently than the so-called peaceful routes) and it’s the only way to truly develop mass movement that is capable of spreading radical change for workers by workers.

The Retail Action Network is confident in continuing this tradition of working class struggle, and we look forward to our future campaigns in which we’ll use it to win victories for our fellow workers. If any workers decide to organise they should contact us and then they’ll have the support of the Retail Action Network and many other workers in the community through the use of a variety of tactics with a foundation in direct action.